What Happened When I Attended a French Church

THIS ARTICLE IS FROM
THE GOSPEL COALITION

Growing up in Montreal as the child of Irish and Italian Anglophone parents, I attended English-speaking schools and, of course, an English church. My parents, although not bilingual, did their best to encourage me and my brother to practice our French. I studied in a French-immersion program as a child and watched educational children’s videos, but it was no use: I didn’t want to speak French. It was too difficult and it made me uncomfortable, so I lived my Quebec-bound life in a bubble.

Today I welcome visitors and break bread with the francophone congregants of Église du Plateau Mont-Royal in the language I once worked so hard to avoid. How did this happen?

Appreciating the place you’re in

My attitude towards Quebec didn’t begin changing until I attended university. I got involved with a campus ministry and immediately noticed two things:

Everything I took for granted, or even held at arms length, they celebrated. I may have been learning history at an international university in a vibrant city, but my world was small—I didn’t even have a full picture of my city!

This was also a critical point in my journey with Christ, a time when I was asking questions and choosing which horizons to set my course for. Quebec had never truly felt like home, but whose fault was that? Seeing God’s love mingled with a love for Quebec forced me to consider who I loved and where I wanted to invest that love.

After graduation, I served overseas with the campus ministry and, ironically, greatly improved my barely functional French-language skills during that time.

I returned with a love for Quebec which had grown in my absence. I was sure now that I was home, and former thoughts of escape to English Canada were replaced with an assurance that Quebec was in need and I needed to be there. But how, doing what?

After much prayer and discussion with my fiancée (now wife), we decided to begin serving at Église du Plateau Mont-Royal. The church’s vision prioritized moving into the neighbourhood, loving our neighbours, and investing in the wider community. We started growing our lives alongside this francophone church plant, and I began an evening French class.

But after weeks of red-faced, faltering conversations, I had to face what seemed like a grim reality: if I could barely express myself in the language, how was I ever going to share Christ with my neighbours or even encourage my brothers and sisters? Was I serving, or was I just a well-meaning burden?

Wrestling with these questions, I realized the visible way I was used to leading would be replaced with growing in grace—both giving and receiving.

There is a great need for the gospel in Quebec and, at bottom, the reason I attend a French-speaking church is to be prepared to share the gospel where I am, but so far it’s my own heart that’s been transformed the most.

In an Anglophone context, I feel confident and self-assured; I’m well-read and like to debate. But when I speak French I feel like a child and often end up resenting Christ’s admonition to be childlike. Although I protest, the value of putting aside my knowledge and ability is slowly revealing itself. It may be the best thing to happen to my soul since I was saved by grace.

I’m quick to justify myself and tell God, “Look at my sacrifices, don’t you see how hard this is?” Then I see the patient grace of those who listen to my French fumblings and gently offer correction and, more often, unqualified encouragement. No one is asking me to earn my place or pay for the bitter and hateful attitudes of my past, so, should I just speak English so grace may abound? By no means!

When I speak French I feel like a child and often end up resenting Christ’s admonition to be childlike. Although I protest, the value of putting aside my knowledge and ability is slowly revealing itself. It may be the best thing to happen to my soul since I was saved by grace.

The loving kindness of my adoptive congregation means I can accept grace from the bilingual and continue improving my French, trusting that I don’t produce the growth. Who can take credit for learning a language anyway? The fruit will be a gift I can share; all I do is show up and use the words I’ve been given, whether that’s on a Sunday, at my neighbour’s, or at the coffee shop.

A significant part of me wants to serve visibly, and an even greater part doesn’t want to struggle. Operating in French makes me feel weak; it makes me feel less, but it’s a picture of Jesus I can’t ignore. He humbled himself in the incarnation, walked among humanity as a servant, reviled and cursed—all the way to the cross—and rose in resurrection glory. He accomplished his mission, and he did it all for the right reason.

Serving in a second-language isn’t the only way to struggle against the stubborn power of pride and to grow in love, but it is a great way. 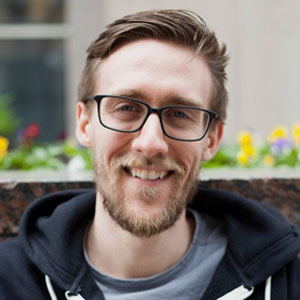 Matthew Civico is a writer and ESL teacher from Montreal. He is married to Maria-Josée and they serve together at Église du Plateau Mont-Royal. Matt writes for Area of Effect magazine and you can follow him on twitter or his blog.