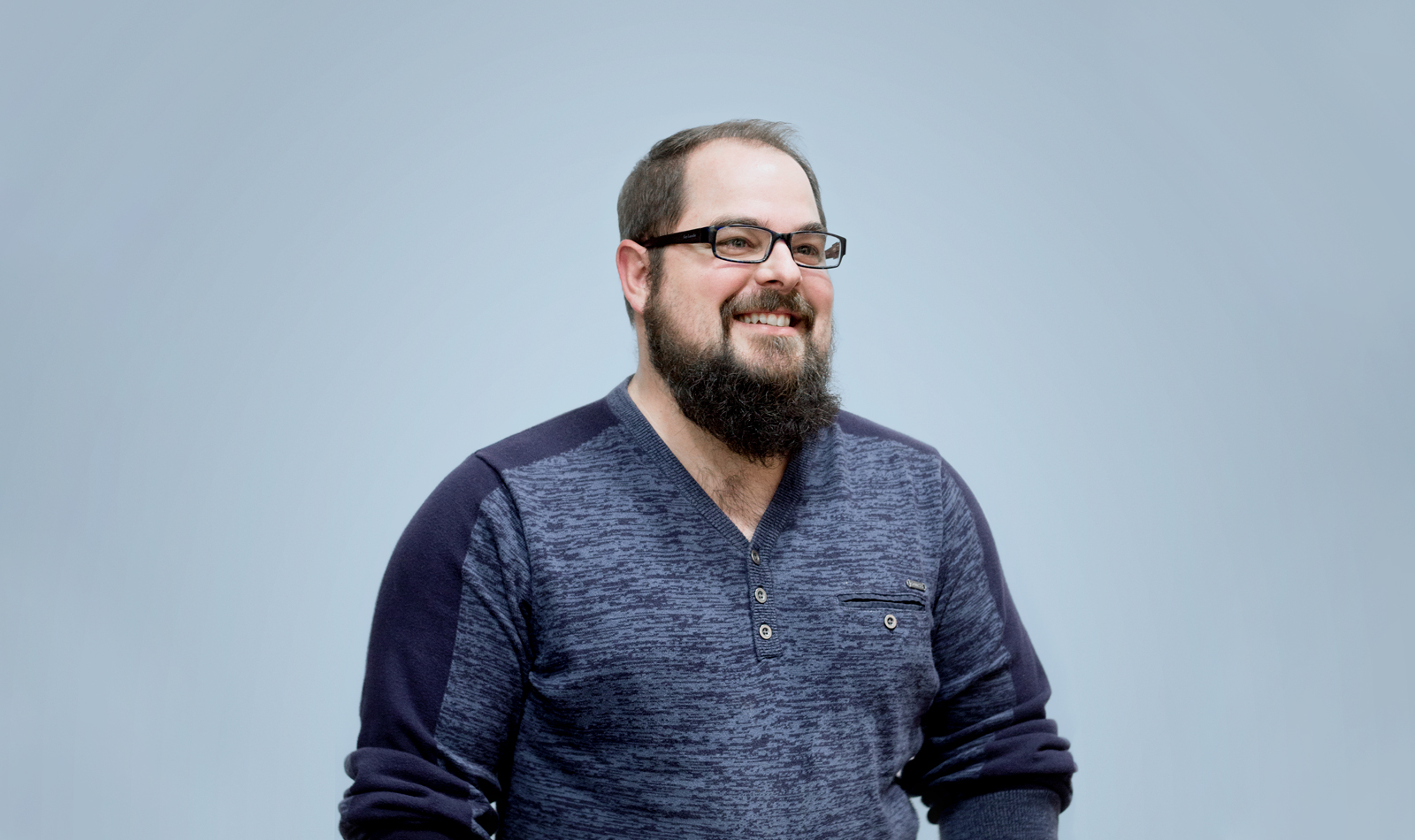 Here is the journey of an ordinary person who, having been trained, now contributes to the training of the next generation of leaders and is involved in the mission in Quebec.

Steve Cloutier was born into a family of five. His parents, evangelical Christians, raised their children according to biblical values. In a predominantly Catholic setting, he was usually the only student in his school from an evangelical family. He attended the Moral Education class with only a few other children calling themselves atheists or Jehovah’s Witnesses. Steve was embarrassed and greatly bothered about being different than his classmates. Even as a child he had a strong desire to be accepted by his peers. This only grew in his teen years and, along with the new desire to enjoy the pleasures of life, led him to reject the faith of his parents.

It was at the age of 19, while he was a student at Cégep (college), that Steve was converted. He was not looking for God, nor did know that he needed him. But God unexpectedly showed up for him one night. The Holy Spirit began to trouble him and gave rise to a difficult period of questioning, all tinged with the fear of abandoning a lifestyle he enjoyed and of losing the acceptance of others. “If God exists, I want to know him and not be against him.” Discouraged by his inability to completely live like a Christian, he finally cried out to God. The Lord opened his eyes and the pieces of the puzzle fell into place. Steve suddenly understood the Gospel and what Jesus had done for him. Set free by the love of God, he gave the Lord his life and his will.

"If God exists, I want to know him and not be against him.”

Discipleship in the Local Church

Having joined the Église Baptiste Évangélique de Victoriaville, Steve was eager to grow in his faith and to share what he had just discovered. As a new Christian in the summer of 2003, he joined a Mouvement Jeunesse team (formerly known as JBEQ), a summer ministry that trains young adults for mission. Very quickly, his passion to share the Gospel led him to begin, along with Guy Lavoie (then responsible for the student ministries of the Fellowship), an evangelical ministry at the Cégep de Victoriaville with the aim of training Christian students to live on mission. From Guy he learned the “DNA” of the mission and a vision of Quebec as a mission field. “Guy’s love for Quebec, his zeal and perseverance in forming disciples, and his faithful Christian walk were a great inspiration to me,” says Steve.

Wanting to learn and understand God’s plan for his life, Steve soon shared his desire to be trained and equipped with his pastor, Benoît Rancourt. He then began a church leadership training and joined a SEMBEQ cohort, all while being trained on the field by Benoît who invested in him as a mentor. “Benoît has had an huge impact in my life,” says Steve, “by praying and sharing with me about the Christian life, answering my questions and modeling godliness and a deep love for his Heavenly Father and for the Word.” Never the academic type, Steve found his studies difficult. But he persevered, thanks to the commitment of his mentor and to the training model of SEMBEQ which places great emphasis on practical training in the local Church.

Filled with a strong desire to reach Victoriaville and the surrounding area with the Gospel, Steve got involved in the re-planting of the struggling church in Plessisville. He and his family moved there and for the next five years worked on the planting of Connexion Church.

“I saw the Lord do great things in the lives of everyone involved in this project. He transformed us! He opened the doors for us to be a positive presence and a living witness throughout the region.”

A Leader in the Fellowship

Steve has continually been involved with JBEQ/Mouvement Jeunesse since his first connection with this ministry in 2003. It has significantly shaped his mission as an evangelist. Having assisted Guy Lavoie since 2005, he was able to take the baton in 2014 when his mentor retired after carrying the torch for more than thirty years. “I did not feel up to it, but it was my heart’s desire to continue to invest myself in the lives of young adults, to pass on the legacy I had received, and to help young Christians to see Quebec as a mission field.” Steve also wanted to discover new ways of sharing the gospel and being in touch with unbelievers, new ways that would be more relevant to our times and our context. In partnership with Camp des Bouleaux and SEMBEQ, Steve had the privilege of training 130 young people for the mission at a recent training camp appropriately named “Multiply!” .

“Mission Québec was born out of a desire to see Quebec move from having the least evangelized people in North America to having a people who participate in the global mission, sending many missionaries abroad to bless other little-reached peoples.”

A Visionary for Mission Québec

Steve sees God at work in Quebec. Serving across the province with Mouvement Jeunesse, he saw firsthand the advance of the gospel. “By only staying in one local church it’s difficult to observe the full extent of the work of God. I have often been privileged to have front-row seats to see the Lord work.” But Steve also sees the needs, which is why he is investing himself in Mission Québec, a mouthpiece for communicating Quebec’s needs for church revitalization, for new church plants, and for the training of pastors, workers and leaders. This requires the help of partner churches that invest by sending missionaries and sharing their talents and experience as well as by praying and giving. “Mission Québec was born out of a desire to see Quebec move from having the least evangelized people in North America to having a people who participate in the global mission, sending many missionaries abroad to bless other little-reached peoples.” Steps have been taken in this direction and Steve recently led a team to serve church leaders in Russia.

God used many people to fulfill his plan in Steve’s life, from his parents, who first taught him the Word, through his pastor Benoît Rancourt, his mentor Guy Lavoie, the leaders of the Fellowship, his teachers at SEMBEQ, as well as the donors supporting the churches and SEMBEQ. Through them all the lost young man so desperately in search of acceptance and living an aimless life, became a visionary and missionary leader.

How are you taking part in missionary work in Quebec? By praying fervently? By leading a church? By making disciples? By giving generously? By participating in a church planting?